Skip to content
Due to COVID-19, shipping may take longer! 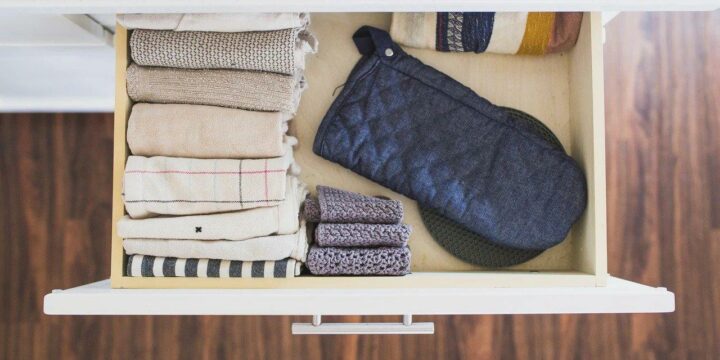 Do you often struggle with storing kitchen towels because you don’t know how to fold kitchen towels? If yes, then you’re in luck. Once you’re done reading this article, you won’t face this issue again.

Folding kitchen towels is an incredibly easy task. The best thing is that there are several ways to do that. One of the easiest ways involves folding the towel into a rectangle and then into thirds.

See also  How to plumb a kitchen sink with disposal and dishwasher: Everything you need to know

How to fold kitchen towels and store them?

The best way of folding a kitchen towel will depend upon how you prefer storing or displaying them. Will it go in a cabinet, on a shelf, or on a towel bar, you must use the right method. Try out any of these kitchens towel folding techniques and choose one that best suits your space and style.

The key to Kondo’s towel storage method is to stand them in a basket, drawer, or organizer, side by side. Do it, and you’ll see each towel at a glance. Moreover, they’ll be less likely to end up in a leaning-tower-of-towels situation. Here are the step-by-step instructions on how to fold and store your kitchen towels in the Marie Kondo way.

This is a fairly simple, fast, and effective way of folding towels that look the way you find on store shelves. This method will result in a bundle look, which is great if you want to impress your guests. They will love that your kitchen towels are stored in a fancy way.

This is arguably the easiest method of folding kitchen towels, and you simply cannot go wrong with it. Start by laying out your kitchen towels on a flat surface. Make sure that the longest end has been stretched out from left to right.

See also  Do you need a permit to remodel a kitchen: Everything you need to know about kitchen permits

Not every kitchen has enough space to lay out your towels on a surface, and that’s all right. The Standing Flop-Roll method will create a perfectly folded kitchen towel for such people.

You can preserve the fluffy feel of the kitchen towels with a folding method that prevents extra wear. By optimizing the fold for storage, you can minimize potential wear along the crease that is caused by a towel bar.

This technique will give you clean edges, making it ideal to create a stack of kitchen towels on an open shelf or a bench.

For a more luxurious touch, display your kitchen towels in a spa-inspired arrangement. This is a space-saving technique where towels will stay tightly together. This method works great for towels that are stored in open cabinets or baskets.

Which one is better: Folding or rolling kitchen towels?

There is no clear-cut right or wrong here. You can prefer folding or rolling the kitchen towels as per your personal preference. Moreover, it’ll depend on the kitchen space where you’ll be storing your towels or the aesthetics you want to achieve. In certain situations, kitchen towels will look great rolled and stored upright in a basket. It’ll make the towels visually appealing and accessible. Your choice of folding method will be motivated by circumstances or the look of your kitchen. If you have any guests staying over, you may want to impress them with your towel folding skills. Try folding the kitchen towels like a spa, and you can wow the guests easily.

What are the benefits of folding kitchen towels?

Save time and effort

Neatly folding and storing your kitchen towels will save you time and effort down the road. You won’t have to look around for towels when you’re in desperate need of one.

Folded towels look great. Who doesn’t like seeing their kitchen look organized and decorated like a hotel? Folding them properly will be a nice treat to your eyes. Opening up your kitchen cabinets to see a neat and sorted stack of kitchen towels will be a great way of feeling fresh and organized.

Having a tidily organized kitchen with folded towels will feel like a sanctuary. With the chaos going around in the outside world, you won’t have any chaos inside your kitchen cabinets. A properly-cared-for kitchen down to the perfectly folded kitchen towels will eliminate any distraction. Moreover, it’ll create a calming and peaceful environment.

With nearly folded and arranged kitchen towels, you’ll be able to impress your guests. Having matching color options being folded beautifully will add a unique dynamism to your kitchen. Moreover, the guests will be impressed by the kitchen decor.

It is believed that decluttering, tidying, and organizing your kitchen can have mental health benefits. By folding kitchen towels and keeping your kitchen organized, you’ll feel calmer and more productive. Moreover, a study found out that towel folding is very effective as it prompts learning in students with intellectual disabilities.